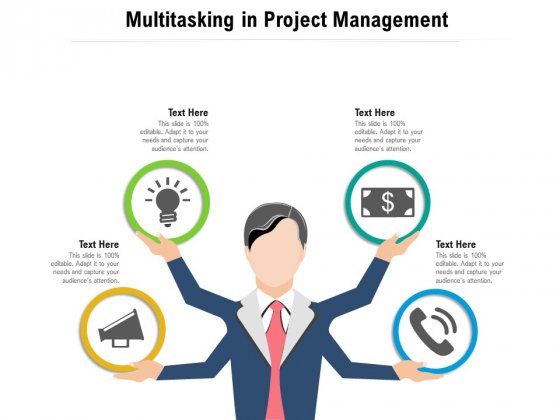 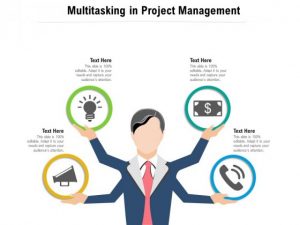 In order to be effective in their roles, project managers must wear many hats and perform many different tasks as they guide a project toward its completion. Between ongoing communication with team members and key stakeholders, issue identification and resolution, budgeting, task management, team-building, and ensuring that projects hit key milestones, there are dozens of vital responsibilities that fall to project managers.

This can lead many project managers (and those who find themselves unofficially in a project management role) to believe that they must multitask in order to be productive.

Research shows, however that multitasking doesn’t actually make us more productive; in fact, it can actually hinder our ability to get the job done effectively. A study by The American Psychological Association (APA), for example, found that switching between different tasks can cause a 40 percent loss in productivity.

1. Our brains aren’t wired for it.

There’s a common saying that goes along the lines of, “the human brain is more powerful than any computer ever created.” While there is much to be said about human ingenuity and creativity, there is one aspect in which computers will likely always have us beat: Their ability to multitask.

While a modern computer can process hundreds, if not thousands, of separate inputs all at the same time, the human brain is wired differently. Instead of unlimited processing units, we’ve got two hemispheres which, research suggests, perform best when focused on one or, at most, two tasks.

“In general, humans are unable to switch from one item to another without losing focus, losing attention, and losing productivity,” Griffin says, describing how, in short, “multitasking hampers our ability to think critically”.

No matter how we structure our time—whether we follow scrum, sprints, agile, or any other kind of project management methodology—there are still only 24 hours in a day. Mathematically speaking, multitasking in and of itself cannot help us complete our tasks any faster, because multitasking does not increase the amount of time that we have to work on those tasks.

If you have three tasks, and each task will take you three full days of work to complete, then in total you have nine days of work. An individual who chooses to multitask and work on all three tasks at the same time does not magically become more productive than the person who works on the tasks one by one, because the same amount of work has to happen in the same period of time.

Though it might go against commonly held beliefs, staggered deadlines (a staple of many projects) can actually be detrimental to productivity, due to a concept known as Parkinson’s Law.

Taken from an essay penned by Cyril Northcote Parkinson in 1955, Parkinson’s Law states that “work expands so as to fill the time available for its completion.” This, according to Griffin, explains why, if we have a week to complete a project, chances are high that most of us will begin working on it at the last possible minute in which we can still safely deliver it.

Staggered deadlines are often necessary for projects in which multiple tasks or goals are pursued at the same time. However, as research has shown, they can also lead to a decrease in productivity due to both procrastination and the need for increased effort when less effort would have been perfectly acceptable.

4. It encourages us to prioritize urgency over importance and impact.

While one might assume that we innately can tell the difference between these two kinds of tasks and prioritize impact over mere urgency, it turns out that the opposite is often true. In many scenarios, we allow urgency to win out over impact, especially at times when workers feel overwhelmed by the amount on their plate—an issue most often faced when multitasking.

How to Avoid Multitasking

While the negative aspects of this practice might seem obvious given this additional context and research, the truth is that multitasking can be difficult to avoid. However, there are steps that you can take to reduce how often you find yourself multitasking, and, in doing so, become a more productive member of your organization.

1.Create a “keystone habit” in your life: Keystone habits are habits that help us reorder our lives, often assisting in anchoring our time, organizing our days, and staying disciplined and focused.

2.Think of life in terms of “shifts”: For most of us, our days are split roughly into three shifts: there’s a work shift, a family/personal time shift, and a sleep shift. Griffin suggests identifying which shift is most productive for you, and which you have the most time and energy during.

3.Identify needless tasks and work to eliminate them: By sitting down and inspecting the different tasks that you are responsible for completing, it is very possible that you will identify which don’t have a substantial impact and, simultaneously, which can be off-loaded to someone else—or possibly even to automated by technology. Eliminating the tasks which do not play into your strengths or which do not put your time to its best use can allow you to create more value elsewhere, and can be an efficient way to reduce the temptation to multitask.

4.Cut down on interruptions across the board: Multitasking doesn’t simply mean jumping between competing tasks. It can refer to anything that forces us to split our attention, including unexpected interruptions like phone calls, emails, texts, breaking news alerts, and surprise visitors to your office. By actively taking measures to reduce these interruptions—by muting email notifications while handling an important task, for example—you can not only help improve focus but also boost your overall efficiency moving forward.

Tim Stobierski is a marketing specialist and contributing writer for Northeastern University. www.northernuniversity.com