THE 4 TYPES OF PROJECT MANAGER 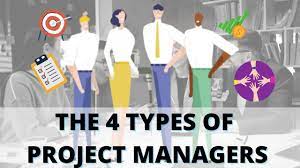 15 Apr THE 4 TYPES OF PROJECT MANAGER

Earlier this year, the Harvard Business Review published an article called The 4 Types of Project Manager. The article described how different types of growth opportunities require different types of project managers to run them. It’s a good article.

It’s been my experience that there are indeed four types of project manager – though in a different way from that described in the HBR. The four types are:

We need techies. There would be no projects without them – both the ones who conceive a grand vision and the ones who work to deliver that vision.

In many organisations – though this is changing – it can happen that there is only so far a techie can go in terms of increased salary and promotion. To get round this problem, techies are often promoted to manager – and therein, potentially, lies a problem.

Often too though, it has to be said, the techie who conceived the grand vision wants to be the one who delivers it i.e. the project manager. Therein too, lies a problem.

The Techie (i.e. a techie who has become a project manager) often has no interest in the ‘things’ of project management – tasks, people, dates, effort and so forth. Techies bring everything back to technical matters. Try to talk to them about project management ‘things’ and their eyes quickly glaze over and you can tell they’ve stopped listening.

(Gently and tactfully) offer to educate them in these matters and they’ll say yes – but it’s a ‘yes’ that’s actually a very definite ‘no’. Technical matters are where the Techie is comfortable; they will almost never step outside their comfort zone.

Often the Techie has no little or no interest in work-life balance – at least, while the project is going on. The Techie reckons that almost all problems on the project have a technical solution and those that haven’t are ‘HR issues’.

Techies generally tend to look for complicated solutions and the notion that there might be a simple, common sense solution is abhorrent to most Techies.

If you’re persuasive enough or failing that, lucky, you may be able to get a Techie to produce a plan for you. The Gantt Chart they give you will almost certainly be a timeline (i.e. without estimates of effort) – probably produced in something like Basecamp or whatever the latest hot thing is.

A Techie project manager may or may not deliver a project. If they do, it will usually be after much blood, sweat and tears that probably could have been avoided if some basic planning had been done.

Techies – gotta love ‘em! There’d be no projects without them.

Least likely to say: “Just give me a few more minutes – I want to get this status report looking absolutely right”

The Pioneer is most often found in companies that were once startups but that have now been on the road for a few years. Generally, in such companies, the Techies (techies who have become project managers) rule the roost.

The Pioneer arrives on the scene convinced that there’s a better way to deliver projects.

It’s tough being a Pioneer. I say this having been one.

The Pioneer has to carry out a constant fight against the ‘We don’t have time to plan it, just go do it’ brigade.

The first time a Pioneer tries to sell a realistic plan to bosses or stakeholders or customers, they [the Pioneer] will face a barrage of criticism. Phrases like ‘That’s not the culture here’ or ‘Is this plan based on a 5-day week?’ or ‘If you don’t do it, I’ll find somebody who will’ or much worse, will be traded freely.

This may well continue over the life of that first project.

But there’s good news for Pioneers. The first project you work on will be the hardest. It get’s easier after that and over time – if you stick to your guns – you may be able to leave your pioneering days behind and become a Soothsayer (below).

Pioneers will pretty much always deliver their projects – that’s if they don’t quit first!

Most likely to say: “I won’t be able to tell you until I’ve done a plan”

Magicians do exactly as the name suggests – they do magic tricks; they take seemingly impossible projects and make them happen. When a boss says, ‘If you don’t do it, I’ll find somebody who will,’ the somebody they are referring to is a Magician.

If a company has Magicians, it should love them. It should give them bonuses, stock options, profit-sharing, promotions, extra grades, flowers on their birthday, presents at Christmas – because Magicians do an extraordinary thing.

Imagine you went to a job interview and the interviewer asked, ‘What do you do?’

‘I do impossible missions,’ you reply.

The interviewer’s gonna say, ‘Sign the contract. How much do we have to pay you to come and do that for us?’

But there is a problem with being a Magician – and it’s a very serious problem.

The result of this is that you now suddenly find yourself on an escalator that only goes up and every time you do a more spectacular magic trick, that becomes the new standard that everybody expects.

While all of this is going on, you and your team are now probably working insane hours with all the attendant problems that come with that – health, relationship, quality of life – not to mention that fact that working long hours for sustained periods of time quickly becomes unproductive. (To be clear what this means – you would be better off working your team forty or so hours a week and sending them home to have a life.)

There’s a saying that ‘All political lives … end in failure.’ This is almost always true of Magicians as well. Sooner or later our Magician take on something that is actually impossible and the project ends in tears at bedtime.

Usually then, the Magician leaves that organization and goes to some place new. Will they have learnt from this bitter experience? Probably not? Most Magicians revert to type and start doing low-grade tricks again – pulling small furry animals from hats! But all they do is get on the escalator another time.

A Magician may or may not deliver a project. If they do, it will usually be after epic amounts of blood, sweat and tears that could certainly have been avoided if some basic planning and subsequent negotiation with the powers-that-be had been done.

Most likely to say: “Sure”

Least likely to say: “No”

The definition of a soothsayer is ‘a person able to foresee the future. This IS what Soothsayer project managers do – they predict the future and then make it come true.

Soothsayers build proper plans. Using these plans, they then tell bosses / stakeholders / customers what’s possible and what isn’t. They do this in a calm, unemotional way using the facts in the plan as evidence.

Soothsayers know that they know more about the project than anybody else. Thus, if a boss / stakeholder / customer says that the Soothsayer is wrong or hasn’t thought of something or has the wrong end of the stick, the Soothsayer will politely correct them and show them the error of their ways.

When bosses / stakeholders / customers engage in delusional behaviour – for example, saying non-fact based things to the project manager like ‘You’ve got to find a way’ or ‘You’ve got to work smarter, not harder’ or ‘If you don’t do it, I’ll find somebody who will’, the Soothsayer politely but firmly brings them back to reality, to the world of numbers and facts.

As somebody once described it – and in some ways, I have yet to find a better description – ‘[Soothsayers] take no crap from the management.’

Soothsayers are good people because they stop bosses / stakeholders / customers from doing harm to themselves.

Soothsayers don’t ‘say no’ or ‘push back’. In a very real sense they don’t bring problems, they bring solutions.

A Soothsayer will always deliver a project. And then another. And another and another. What Soothsayers do is sustainable. They build a track record of success, while having a life outside work – which is as it should be.

Most likely to say: “Here’s why that won’t work but here’s what you could do”

If you found this useful, please share it with anyone else you know who’s trying to get projects done successfully.